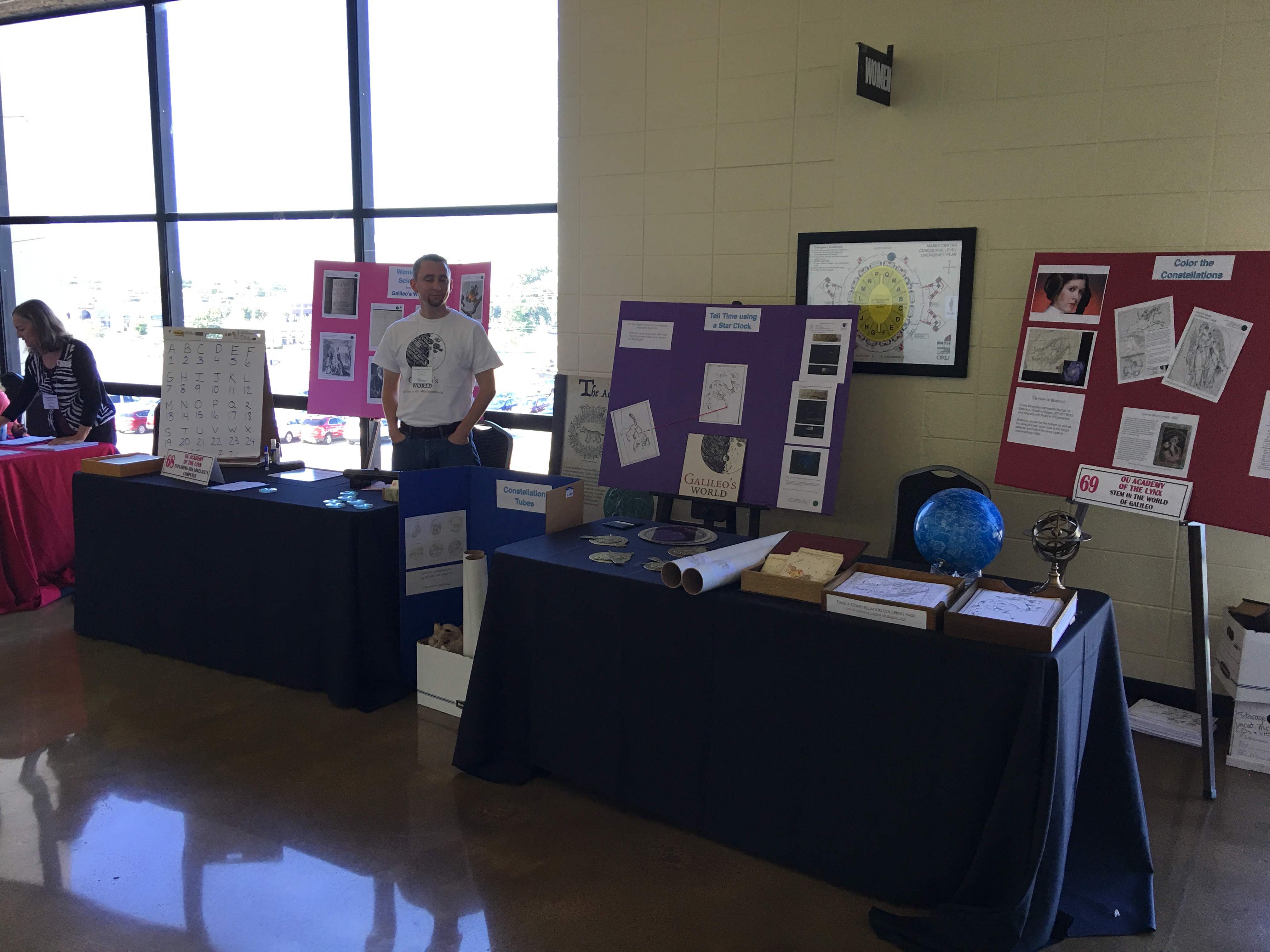 Lynx Open Ed was privileged to participate for the third year in a row in the annual Women and Science conference for K12 students and teachers across the state.  Held last Tuesday in Tulsa, the conference is sponsored by EPSCoR to encourage young people to pursue careers in science, technology, engineering and mathematics (STEM) fields (cf. the conference page).

Brent and Kerry set up two booths with hands-on activities exploring STEM in the world of Galileo.  We were told to expect about 900 middle-school and high-school female students, along with their teachers, to drop by our booths during the all-day event.  What fun! 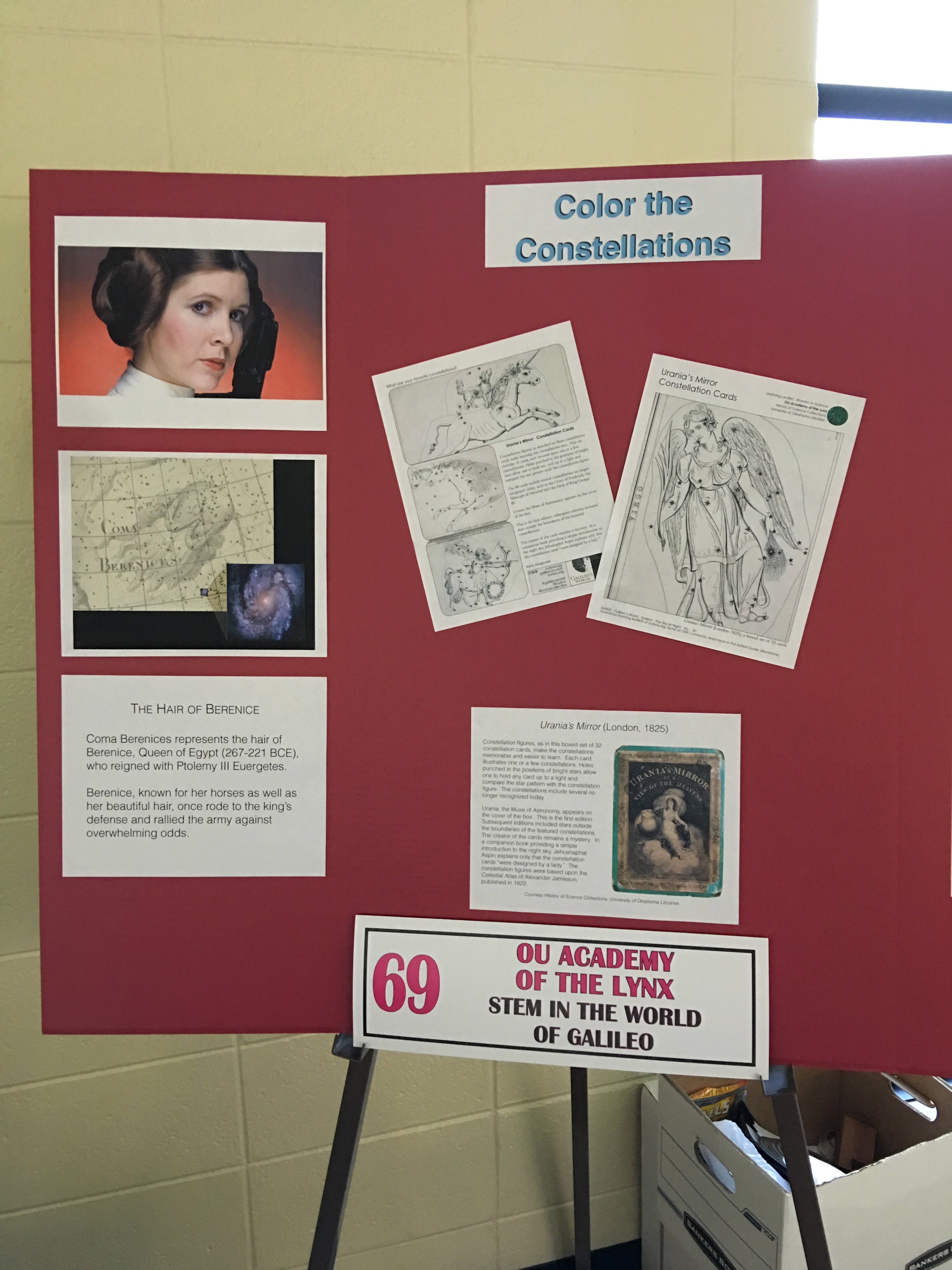 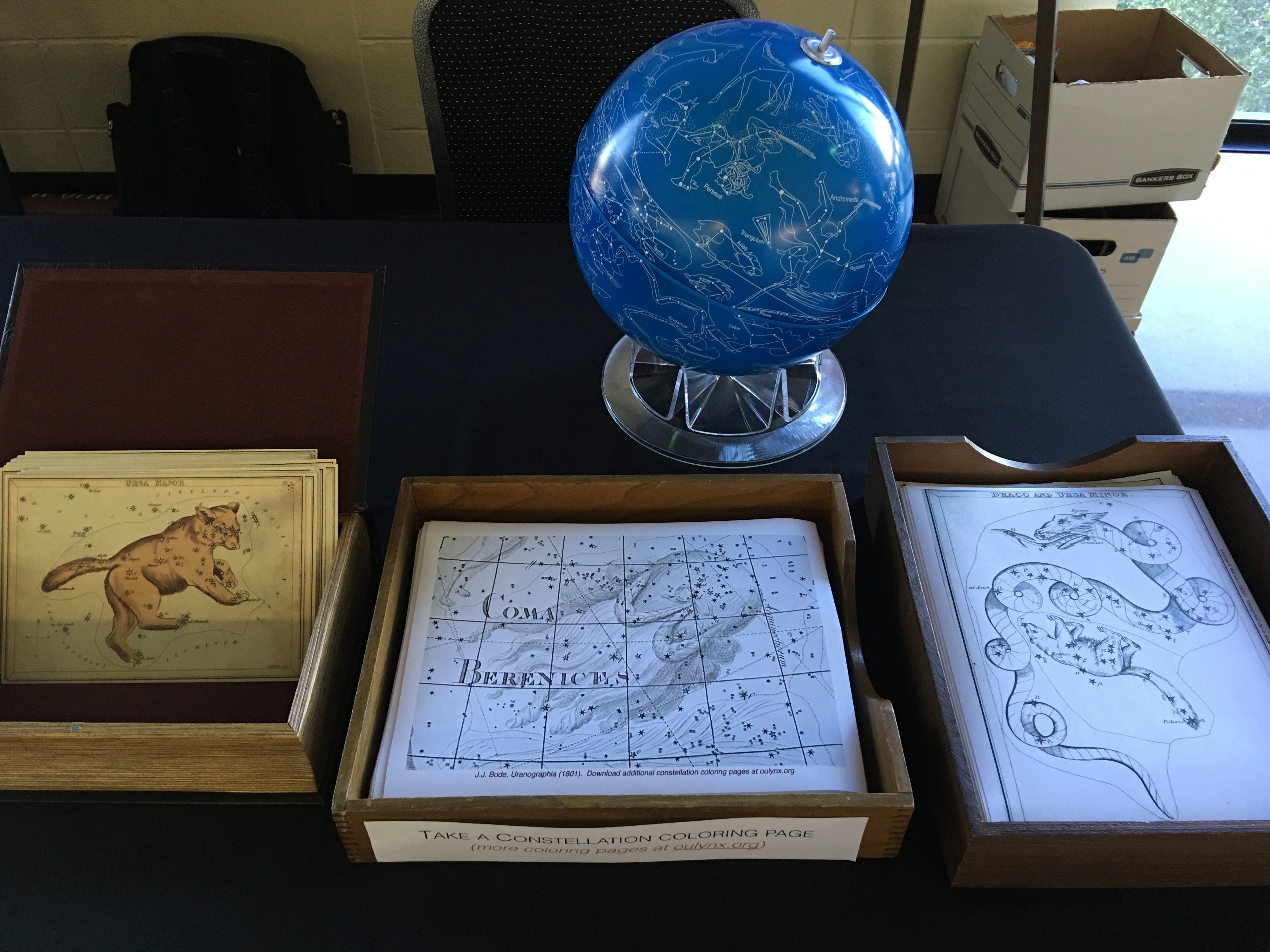 The Urania's Mirror constellation cards, published in 1825, were "designed by a lady."  We have previously featured these as OERs and at a Lynx Coloring Party.

We also featured a coloring page for Coma Berenices, the Hair of Bernice, from Johann Bode (1801). Coma Berenices represents the hair of Berenice, Queen of Egypt (267-221 BCE), who reigned with Ptolemy III Euergetes. Berenice, known for her horses as well as her beautiful hair, once rode to the king’s defense and rallied the army against overwhelming odds. In this heroic story, attributed by ancient writers to the actual historical figure, we invited visitors to our booth to see anticipations of another warrior-general known for her beautiful hair (see picture, above).  An OER for Coma Berenices is in preparation and will be published shortly.  Search OERs for published activities by setting the series to "Constellations." 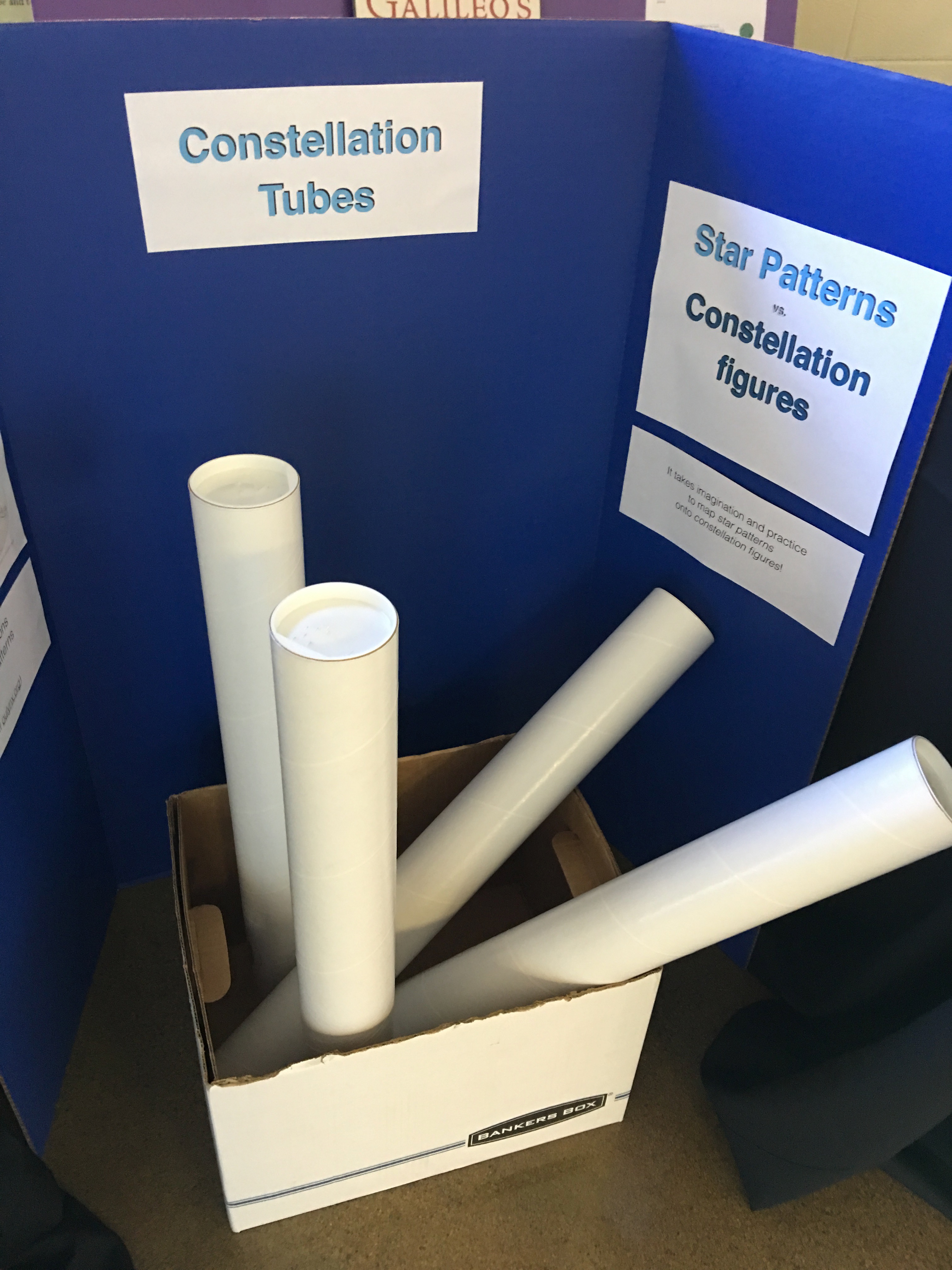 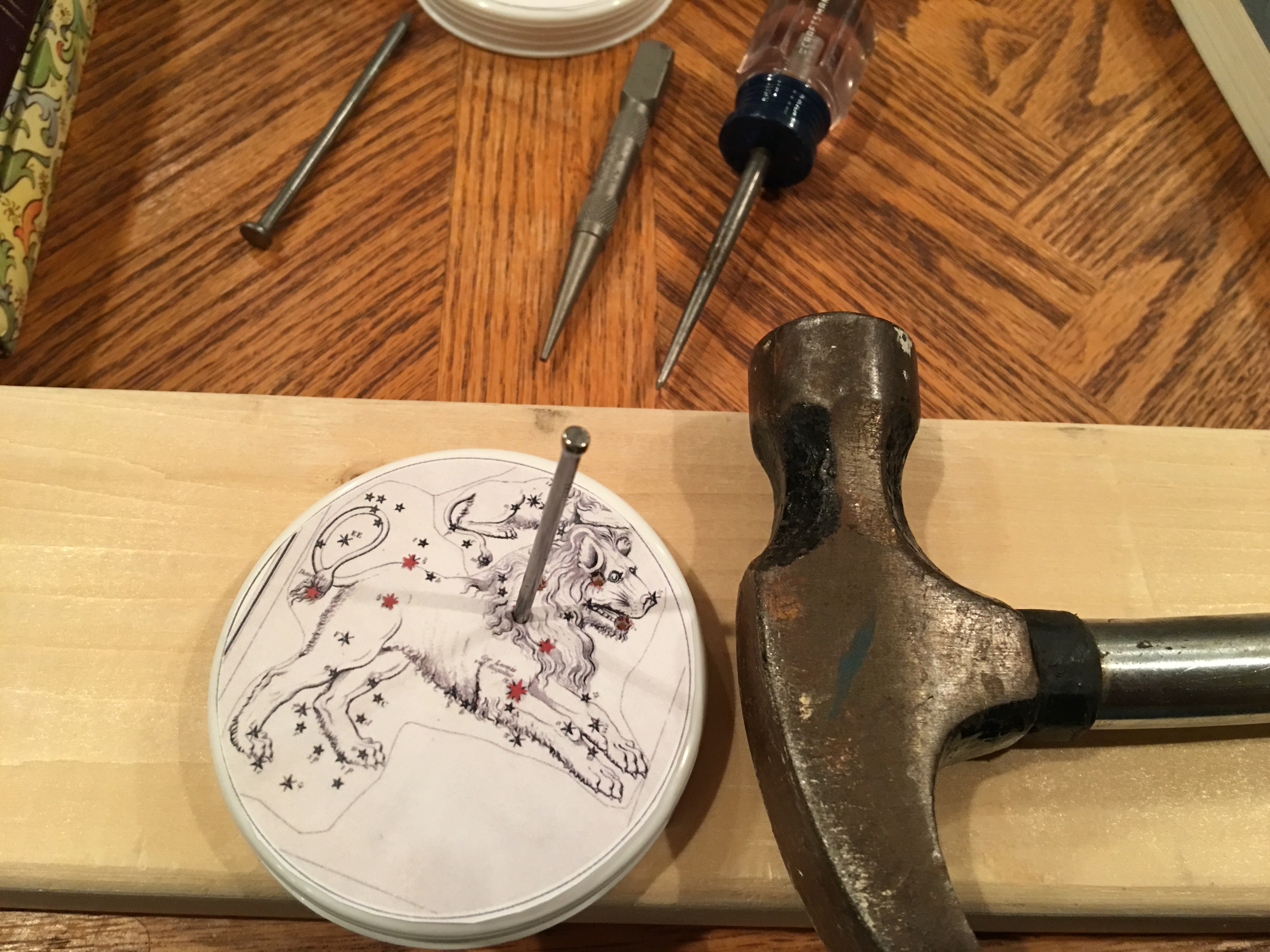 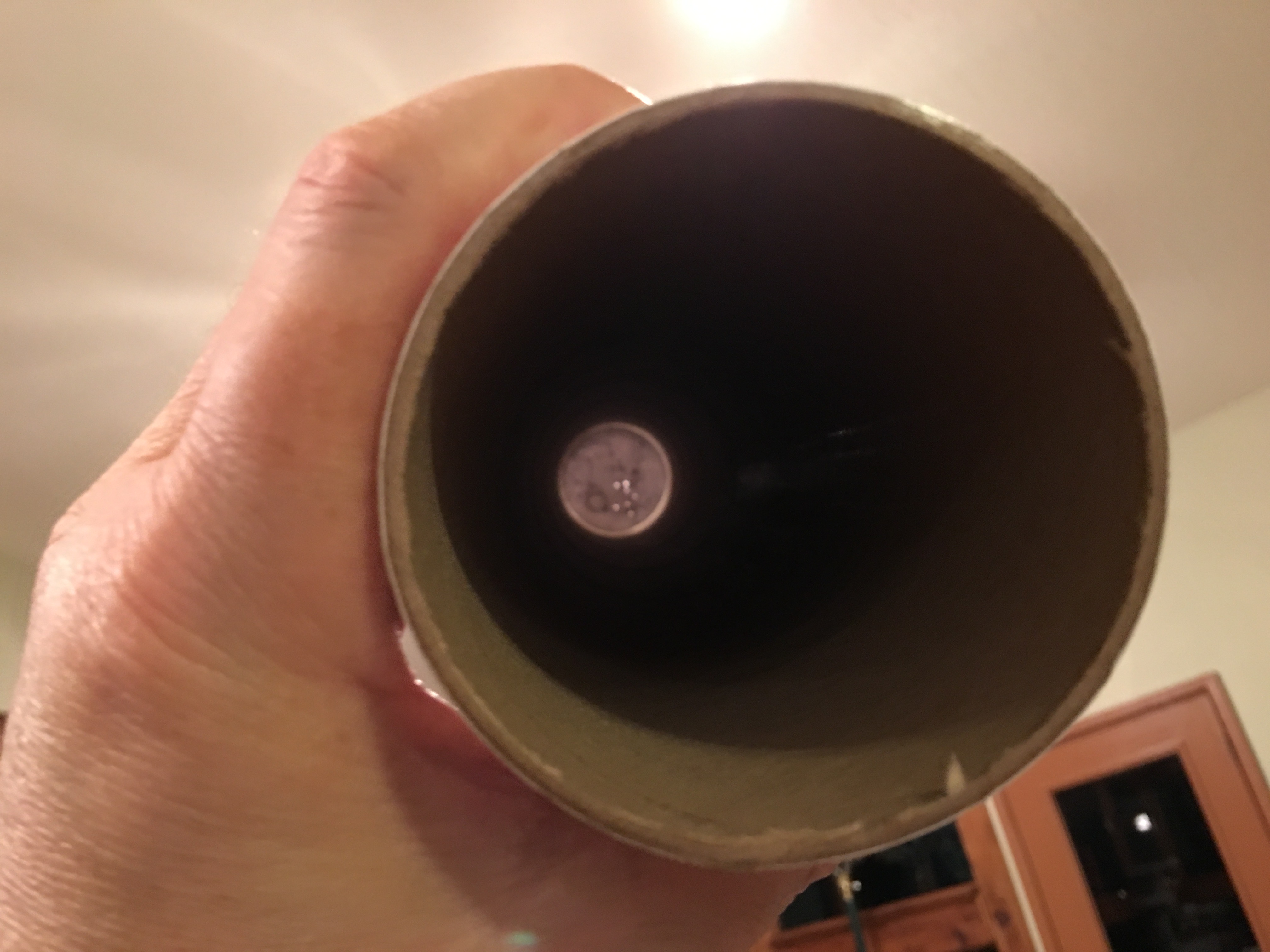 Constellation figures, as found on coloring pages, make the constellations memorable but do not help one to find them in the night-time sky.  Even the Urania's Mirror cards include too many stars to guide one in identifying the constellations.  One solution is to make Constellation Tubes, as shown above.  Our templates (to be published here soon) are based on the Urania's Mirror figures, but indicate only a few stars that make a simple star pattern that is easily recognized in the sky.  For example, in looking through the Constellation Tube it's easy to see a Big Dipper, but not a Big Bear.  With a constellation tube, one can learn to identify Orion the Hunter by the simple pattern of three stars in his belt; or Sagittarius the Archer by the simple pattern of a teapot.  Such simple star patterns can be punched in our template pages and affixed to poster-mailing tubes (as shown above), or on aluminum foil attached to paper-towel tubes (if printed at half size). This OER is under preparation. 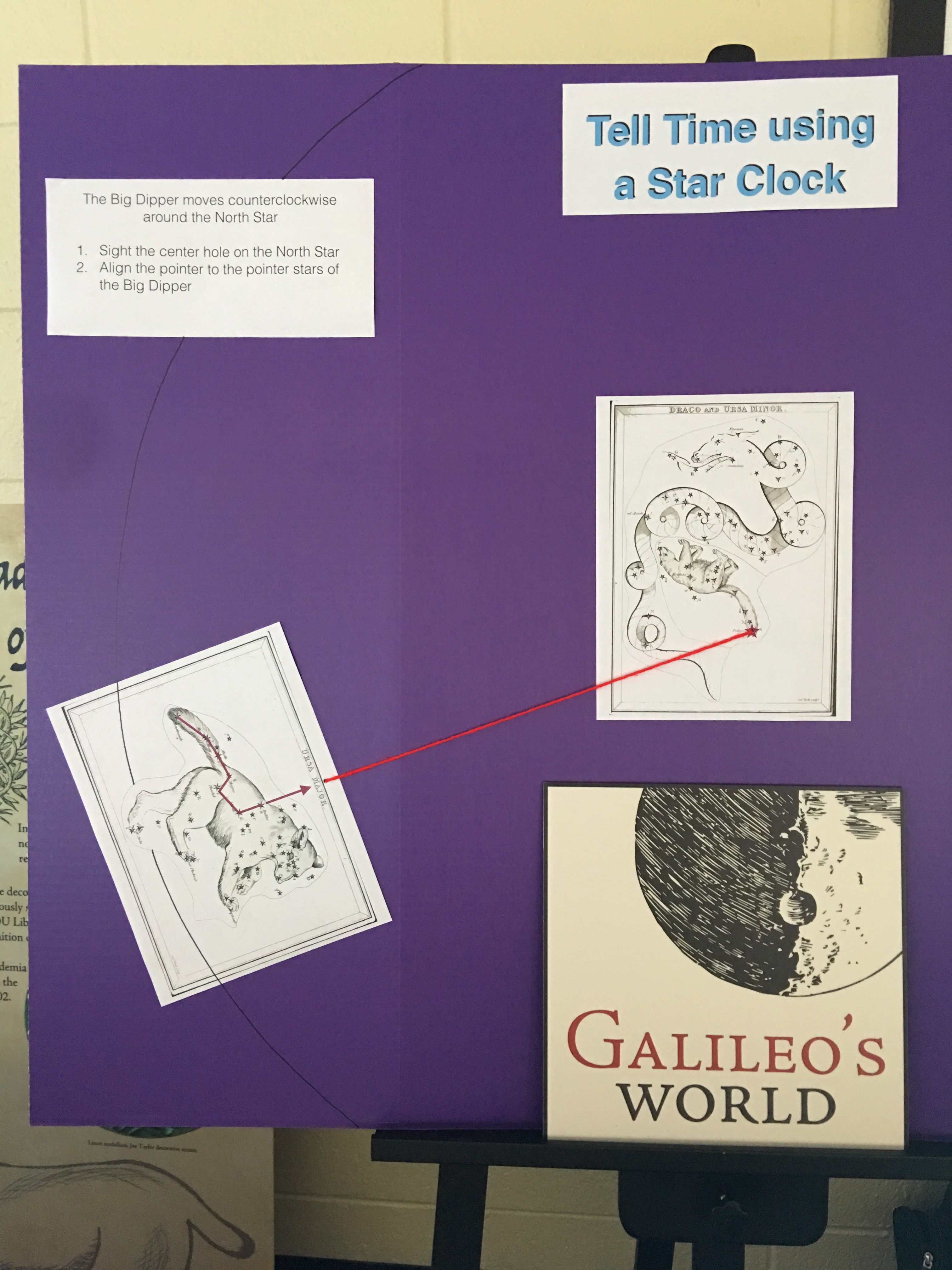 We brought a number of nocturnal star dials, replicas of an original star clock held in the Museo Galileo in Florence. Once students learn to identify the Big and Little Dippers, they are ready to try using a Star Clock to tell time at night.  The basic idea is that the Big Dipper revolves around the North Star like the hand of a clock, completing one complete revolution counter-clockwise every 24 hours.  A simplified make-it-yourself star clock, with an accompanying OER, is in preparation. 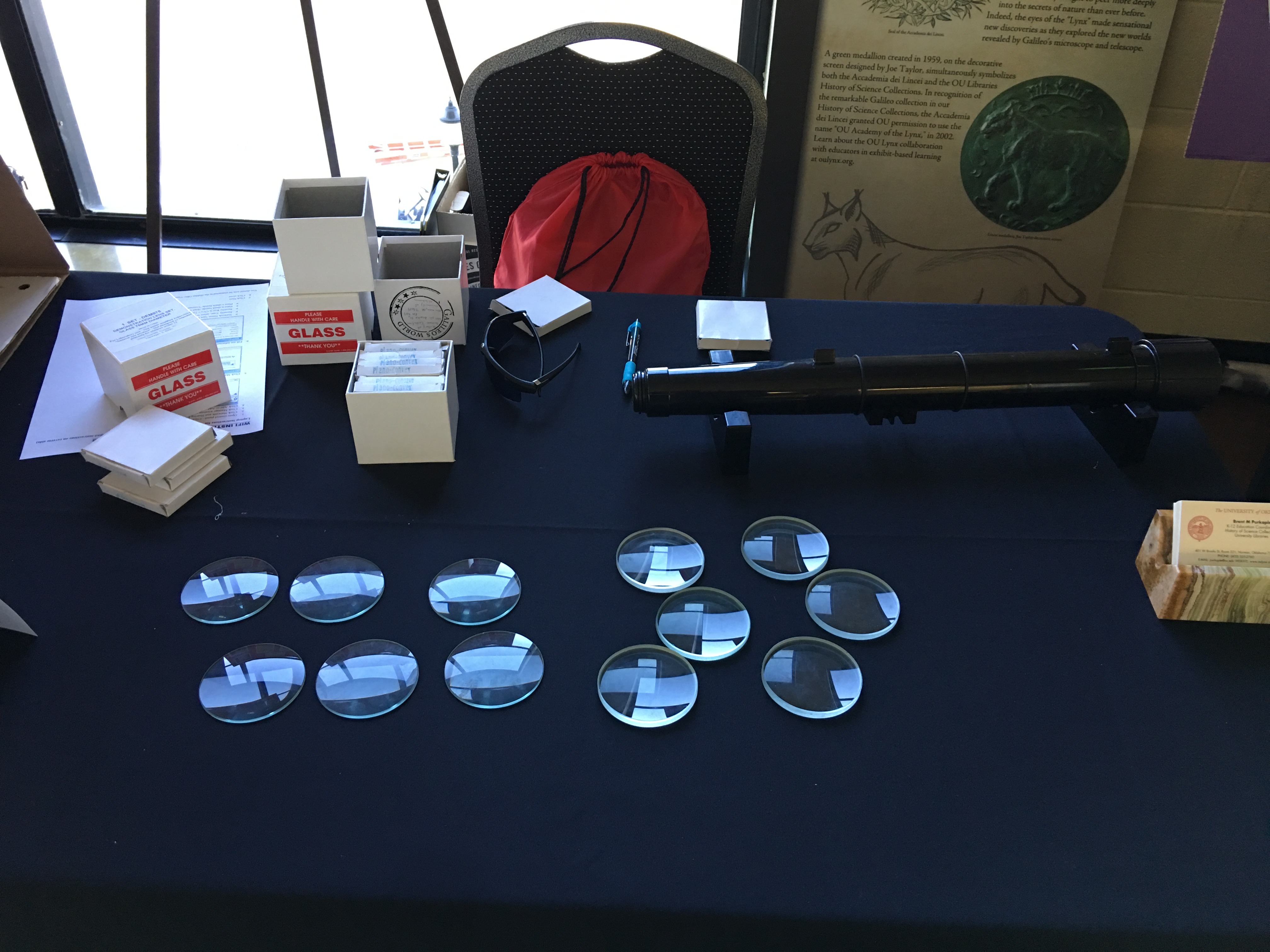 One of our most engaging activities over the last year in exhibit-related instruction has been the construction of a "telescope" using two lenses of the same types as those employed by Galileo.  This activity results in many "a ha!" exclamations as the lenses come into position to reveal the magnifying effect.  Again, an OER is in preparation and will be published here soon. 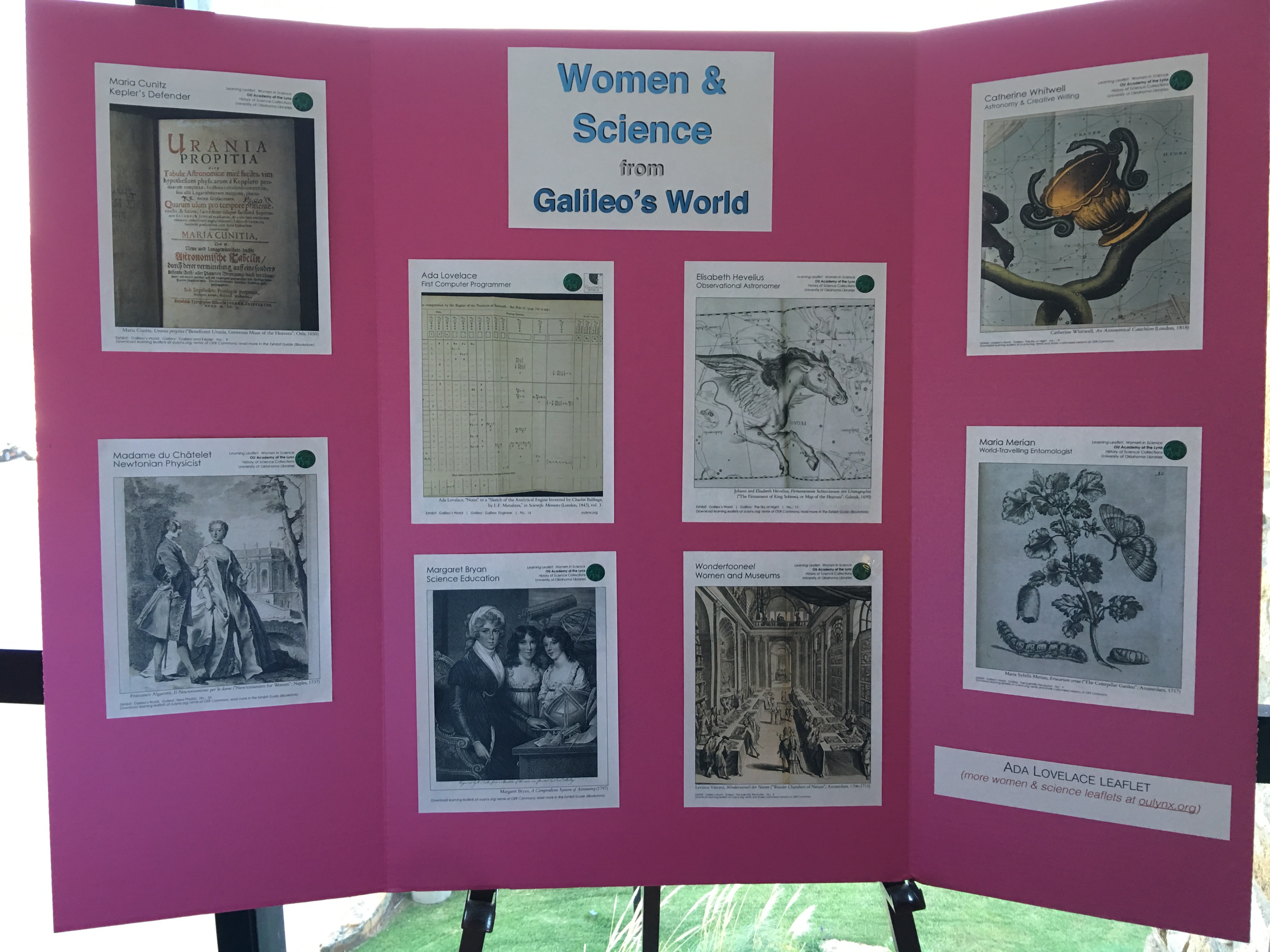 Women and Science from Galileo's World

Many of our existing Learning Leaflets tell some remarkable stories about women and science in Galileo's World.  Download them by searching the OER section here (under the "Learn" menu):  Woman and Science Learning Leaflets.  We also featured an activity, under preparation, related to the Ada Lovelace Learning Leaflet. 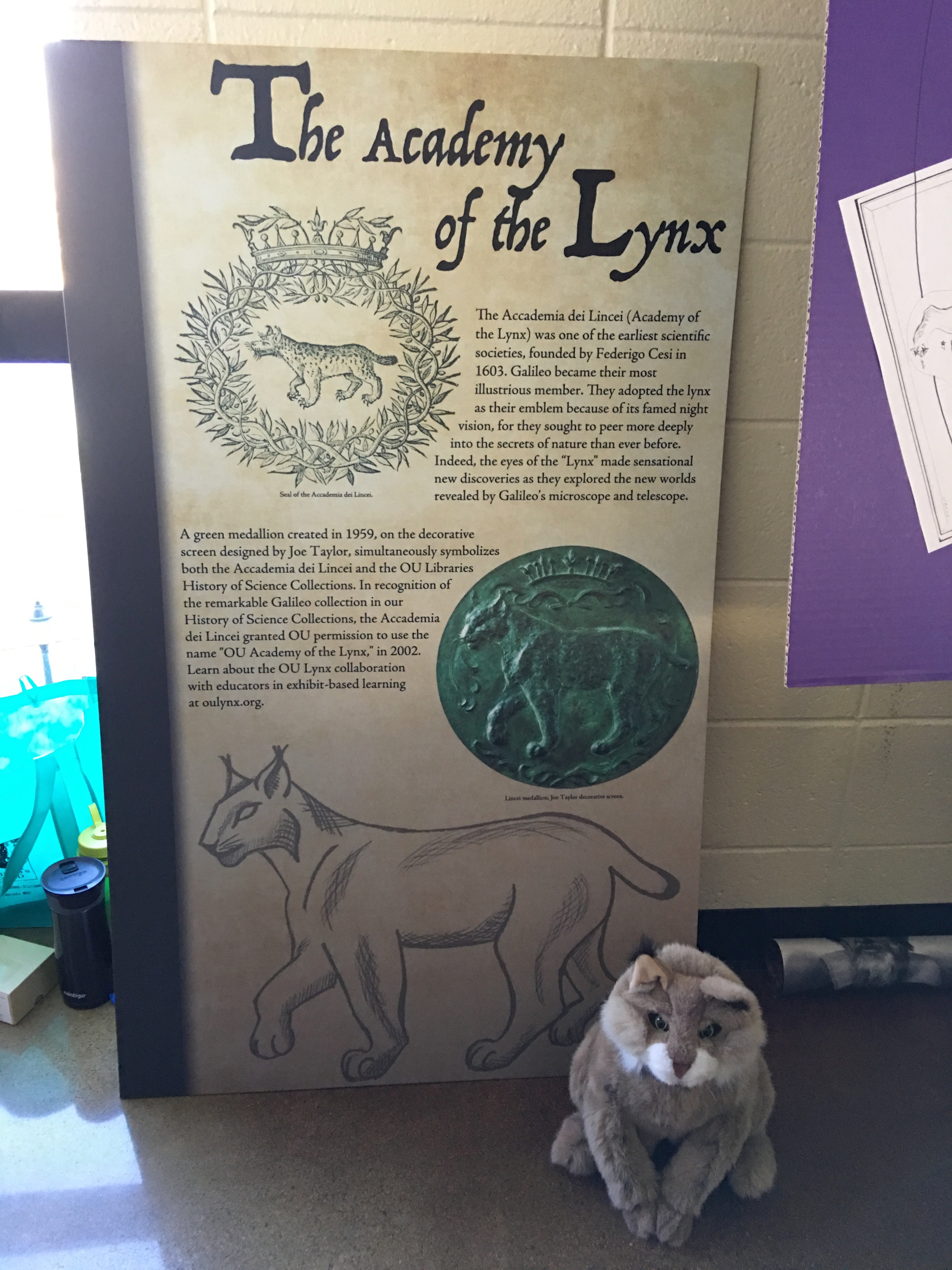 Academy of the Lynx

For both of us, the opportunity to interact with so many students was exciting and joyous. The experience prompted many ideas for further development, and we hope inspired some of the students with sparks of creativity that will continue to light the fires of ongoing learning.